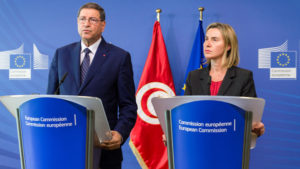 The European Union (EU) adopted the Joint Communication “Strengthened EU Support for Tunisia” Thursday with a financial budget of up to €300 million in 2017 as part of the continental bloc’s commitment to the country’s democratic transition faced with critical challenges.

EU’s High Representative for Foreign Affairs and Security and Vice-President of the European Commission, Federica Mogherini reaffirmed their commitment to support the North African country’s “democracy and economic growth” in a challenging region. “Today, investing in the present and future of Tunisia and of Tunisians, we are investing in our own present and future,” she stated.

The adopted Joint Communication aims to promote sustainable stability, good governance, development and security. Since the end of the Ben Ali regime in 2011, Tunisia has had five prime ministers and the sixth took over a couple of months ago. Demand for employment and security has often been the major obstacles for the authorities and attacks on tourists have crippled the once flourishing tourism sector leading to massive job cuts.

“We cannot turn a blind eye to the plea of Tunisia’s young people” after the revolution said Johannes Hahn, Commissioner for the European Neighborhood Policy and Enlargement Negotiations. He claimed that “the new democratic Tunisia now needs to transform its economy and social structures” in order to create a better future with concrete perspectives for “a young population which is among the highest educated but most under-employed”.

The Joint Communication and financial package is also aimed at finalizing a Deep and Comprehensive Free Trade Agreement with Tunis by 2019. Hahn hinted that the goodwill gesture and “the money is not unconditional” considering that the EU is almost doubling its current annual aid to €300 million until 2020, as well as lend €500 million to help stabilize the Tunisian economy, to be disbursed this year and next. “We have decided to double our financial effort, not only because Tunisia needs the money but to increase our leverage,” Hahn said.