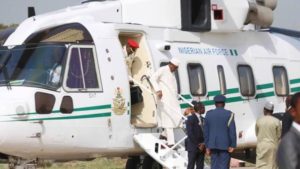 The move is part of the president’s decision to cut down the fleet and to reduce waste, local media reported.

The helicopters, Augusta AW 101s from the VVIP range of the fleet, were handed over to the NAF by the national security chief, Babagana Monguno in the presence of the Minister of Defence, Mansur Dan-Ali.

The fleet of Nigeria’s presidency has been a subject of debate in Africa’s most populous nation.

Nigeria, Africa’s second largest economy, officially entered a state of economic recession for the first time in over 20 years. This came after current figures revealed that the economy contracted for a second consecutive quarter.