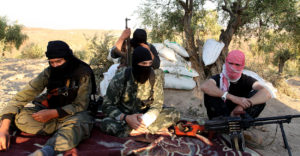 The US embassy in Nouakchott Friday alerted American citizens against looming terrorist attacks in the North African country following calls launched by the Islamic State group on its followers to stage global attacks against US interests and nationals.

“The US embassy informs American citizens that the American government has received intelligence indicating that terrorist groups are preparing attacks against places where Americans gather in Nouakchott,” the embassy said in a statement.

The alert, the embassy argued, is issued because of calls for global attacks for end 2016 made by the IS group, which is in disarray in Iraq.

Mauritania has been relatively spared by terrorist attacks over the past years, with the exception of kidnappings of foreigners in its uncontrolled vast deserts.

Reacting to the alert, a security official contacted by media acknowledged the threat but indicated that authorities are in control.

“Even if zero risk exists nowhere, you cannot afford now to worry about the current security situation in the country,” the official said.

“We think we are in control, either at borders or in the country where dangerous groups are under watch.”

In September, the authorities downplayed the threat represented by a group of people believed IS sympathizers arrested in July by the police, reports say.