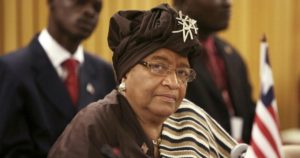 As the President of the Republic of Liberia and the actual Chair of the ECOWAS Authority of Heads of State and Government, Mrs Ellen Johnson-Sirleaf “has expressed deep concern about current developments in the Islamic Republic of the Gambia”. Mrs Johnson-Sirleaf released this position in a communiqué on Sunday, “referring to the call for new elections by President Jammeh on grounds of alleged abnormalities in the electoral process”.

“This reversal of position by President Jammeh was unacceptable and threatened peace not only in the Gambia but also the entire West african sub-region”, emphasized the Head of State of Liberia.

The ECOWAS Chairperson supports the joint statement issued by the African Union, ECOWAS and the United Nations, said the communiqué, noting that it leaves no doubt that the reversal in the position of President Jammeh is “totally unacceptable.”

The communiqué stated further that “in this twenty-first century, leaders have no room for selectivity -to accept only outcomes which give them a mandate to lead and deny a result which withdraws that mandate, especially when election procedures and modalities are similarly applied.”

The Liberian President concluded her communiqué with a vibrant “plea to President Jammeh to do the right thing and take actions to facilitate a smooth and peaceful transition in the Gambia, respecting the election results which reflect the freely expressed will of the Gambian people”. “Jammeh’s initial and principled position of acceptance of these results have already been lauded by all in the global community, including myself as the mark of enlightened leadership and patriotism”, insisted the Statewoman.

Last Saturday, Gambian authorities prevented from landing in Gambia an airplane which had on board Mrs Johnson-Sirleaf. She then sent a special message to President Jammeh.

Meanwhile, Gambia’s ruling party this weekend said its leader, outgoing President Yahya Jammeh, would contest the election results in the Supreme Court per the country’s constitution.

The party’s statement follows a televised address on Friday night by Jammeh who said he has rejected the election results, and called for a new election.

“The televised statement was a prelude to the appeal the APRC (Alliance for Patriotic Reorientation and Construction) is preparing before the Supreme Court against the fraudulent decision of the Independent Electoral Commission,” the party’s statement read.

The Supreme Court has not sat in more than a year, so judges will have to be appointed before they can consider the president’s legal complaint, potentially delaying the new elected Adama Barrow’s inauguration.

The United Nations and African Union have called on Jammeh to step aside while the regional body ECOWAS called on the armed forces to stay neutral.

President-elect Adama Barrow also called on Jammeh to accept his defeat in the December 1 presidential election, rejecting his request for a new vote, and urged his supporters to remain calm.

A massive number of Gambian security forces have been deployed in the capital Banjul, which remained calm since the dramatic u-turn by long time ruler Yahya Jammeh.

Jammeh who has ruled Gambia with an iron fist for 22 years caught many by surprise after he acknowledged his defeat last week after the electoral commission announced Barrow had won the vote. But he later retracted and called for new elections.