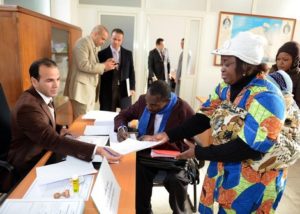 Moroccan authorities have launched a new campaign to regularize the legal status of undocumented migrants showing the North African country’s hospitality, attachment to international law and respect of the dignity and rights of migrants.
The announcement of this new royal initiative, welcomed by the African illegal migrants and international community, was made by Morocco’s National Commission in charge of Illegal Immigrants’ Regularization
During King Mohammed VI visits to sub-Saharan African countries, several Heads of State have thanked the Sovereign and hailed Morocco for its migration policy which aims at promoting the economic and social integration of illegal immigrants mainly those from Sub-Saharan African countries, says the press release issued by the Commission.
Following the success of the first phase of the regularization campaign of 2014, the Moroccan Monarch ordered another campaign to solve the pending issues of the undocumented migrants to enable them live in dignity and enjoy the rights to work, to medical care, to education… as their fellow Moroccan brethren.
The situation of about twenty-five thousand African illegal immigrants was regularized during the first campaign making Morocco one of the first countries of the South to adopt a genuine solidarity-based policy regarding sub-Saharan migrants.
In a speech made on the occasion of the anniversary of the Revolution of the King and the People in August this year, King Mohammed VI had said, “This integrated policy, which is rooted in humanitarian values, is designed to make sure migrants’ rights and dignity are safeguarded.”
As part of the implementation of this policy, “my country has, without any arrogance, pomposity or discrimination, regularized the situation of migrants using fair and reasonable standards. It has provided the conditions needed for migrants to reside, work and lead a dignified life within our community,” added the Sovereign.
He also said that “this is hardly surprising on the part of Moroccans, considering the way they always treat their guests. Generosity, hospitality and the warmth of their welcome have long been deep-rooted features of our identity and culture.”
“I am deeply satisfied to note that migrants are hardworking people, who are known for their good behavior, their commitment to the rule of law and their respect for Moroccan values and sanctities”, the Monarch had pointed out, stressing that Morocco is only fulfilling its duty towards these people, whose circumstances have led them to risk their lives and leave their families and homeland.”
“Morocco, which has long rejected the methods adopted by some to address migration issues and which have turned out to be a failure, is proud of what it is doing in terms of receiving and integrating migrants. It will keep up this practical, humanitarian approach”, underlined the Sovereign.