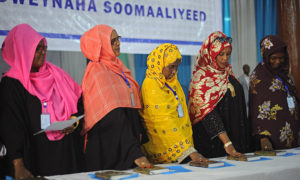 Forty one MPs elected to senatorial seats in the Upper House and the 242 deputies of the Lower House have taken their oaths of office on Tuesday to represent the people of Somalia in the country’s tenth Parliament.

Elections for the two houses are not over after an increase in the number of seats in the Upper House of parliament from 54 to 72 by Somalia’s National Leadership Forum in contravention with the country’s constitution.

The United Nations, African Union, European Union and international partners have expressed concern over the move.

“Any further expansion of the Upper House should only be contemplated after the presidential vote has been held in the new federal parliament and implemented through a proper constitutional process,” they advised in a joint statement on Tuesday.

The international bodies also decried the statement by the NLF revoking all disqualifications of candidates made by the country’s electoral bodies for allegedly committing abuses and malpractices.

Somalia’s presidential election scheduled for December 28 has once again been delayed and according to the electoral commission on Tuesday, a total of 293 MPs had been elected so far.

Among the presidential candidates are the incumbent President Hassan Sheikh Mohamud and Fadumo Dayib, one of the two females to ever run for president in the East African country that has faced threats from the Islamist al-Shabaab group.