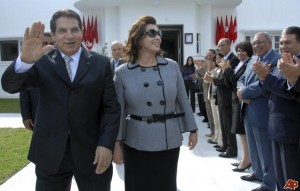 Some on the belongings of ex-president Zine al Abidine Ben Ali will be going under the hammer in Tunisia. He left the country when protests swept Tunisia in early 2011, as the Arab Spring uprising gained momentum.  The items on exhibition highlight the life of a luxurious president. The items were seized after his exile to the Kingdom of Saudi Arabia.
According to Minister Tarek Dhyab, the items on exhibition which will be sold in an auction amount “only to 20 to 30% of (Ben Ali’s) possessions.” He said such belongings portray that the country “was controlled by a gang leader – not someone fit to lead a country.” Thousands of seized luxurious items are being displayed and amongst which are supercars of various models, antiques, art, jewelry and ornaments. The auction is expected to yield up to 10m euro (£8.2m) which will be added to the coffers of the state.
Speaking about the expectations of the sale, the organizer of the auction Afaf Dous said they have “received many inquiries, even from outside Tunisia, even before the opening, asking about it and hotels have already been reserved by the visitors.”
Tunisia’s economy shrank 2.2% last year, unemployment stands at around 17% and the government is heavily in need of money as pressure continues to mount with the demands for economic and social reforms. The economy is facing various challenges since the uprising and there are hopes that the money raised from the auction will help the government in its financial crisis.
Viewing of the items has been opened to the public after being limited to government ministers and ambassadors to inspect the various lots after its opening.