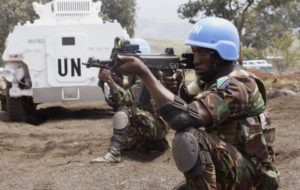 Two military helicopters crashed in the North Kivu province of Democratic Republic of Congo with at least four crew members on board, officials confirmed on Monday.

According to a report on local UN-sponsored Radio Okapi, the helicopters crashed while pursuing fighters from the former Congolese rebel group M23.

However, government spokesman Lambert Mende told Reuters it was not clear what brought down the helicopters on Friday.

Reports of a possible M23 revival by former fighters held in camps in Uganda and Rwanda have surged in recent weeks.

According to local media, the M23 rebels have crossed over from Uganda and captured a village in the eastern DRC.  Kampala confirmed that 40 members of the rebel group interned in a military base in western Uganda had escaped from the camp, while more than 100 were arrested as they tried to cross over to the DRC.

The reported re-emergence of M23 rebels in eastern Democratic Republic of Congo could present a security problem for President Joseph Kabila, who is currently facing political resistance.

The M23 was the largest of dozens of armed groups in the country and controlled huge swaths of eastern Congo in 2012 and 2013 before it was defeated by Congolese and U.N. forces.