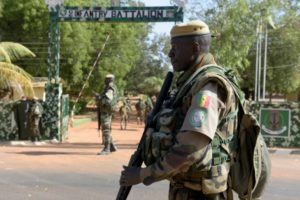 The ECOWAS Mission in The Gambia (ECOMIG) on Monday said it has seized important quantity of weapons and ammunition from the private home of exiled former President Yahya Jammeh.

According to the commander of the ECOMIG mission, General François Ndiaye, who directed the operation in the home-town of the former president, “all weapons and ammunition are now in the custody of ECOWAS, so nothing will happen there (Kanilai).”

“The situation is under control … the Gambian armed forces have been very cooperative,” he said.

He did not specify the quantity of weapons nor the day when they were seized.

General Ndiaye also confirmed the arrest of the head of an elite unit of the Gambian army, General Bora Colley in Senegal and four members of Jammeh’s bodyguards who had accompanied him into exile but tried to return to The Gambia.

General Bora Colley was appointed prisons boss by Jammeh in 2012. He was arrested at the border checks conducted by the authorities.

Exiled Yahya Jammeh governed The Gambia for over two decades and is on record to have said he could continue for a billion years if it was the will of Allah.

He came to power through a bloodless coup in 1994 after deposing Dawda Jawara, the country’s first president.