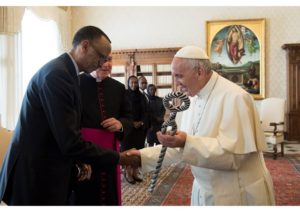 Pope Francis on Monday apologized and begged forgiveness for the “sins and failings of the church and its members” during the 1994 genocide in Rwanda.

According to a statement from the Vatican, the Pontiff, who was meeting with Rwanda’s president on Monday, acknowledged that priests, nuns and members of the Catholic Church had succumbed to hatred and violence in Rwanda, “betraying their own evangelical mission.”

The head of the Catholic Church expressed “solidarity with the victims and with those who continue to suffer the consequences of those tragic events” in the East-African nation.

The Pope’s move follows a request from Rwanda in November for the Vatican to apologize for the church’s role in the genocide.

Kigali said clergy implicated in the killings were allowed to start new lives in Europe and were protected by the church.

The Catholic Church was accused of being close to Hutu-led government in 1994 when 800,000 mostly Tutsis were killed.