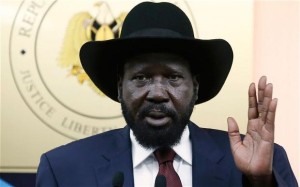 “I directed the prosecutor general to immediately review the cases of those who have committed crime against the state, commonly known as political prisoners, and ensure the necessary steps are taken for their release,” Kiir said in a speech in the capital, Juba.

“I am also declaring unilateral ceasefire effective from today.”

Mr Kiir took office as president and Mr Machar as his deputy in 2011, when South Sudan won independence from Sudan following a decades-long struggle and became the world’s youngest country.

The latest trouble erupted when the president accused the vice president of leading a coup.

Machar fled Juba in July 2016 following eruption again of the violent conflict between his forces and those loyal to President Kiir, only three months after taking over the first vice presidency in compliance with a peace agreement negotiated and signed in the Ethiopian capital, Addis Ababa.

The UN estimates 50,000 people were killed in the conflict and more than 2m of the 12m population were forced to flee their homes.