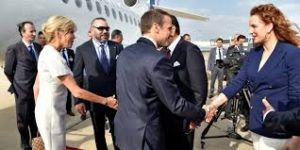 Morocco and France have voiced resolve to pool efforts to fulfil their shared goals in Africa, mainly boosting the continent’s development and growth and promoting a balanced relationship.

This came during the summit talks held Wednesday between King Mohammed VI and the newly elected President of France Emmanuel Macron, who arrived in Rabat earlier in the afternoon on a friendship and family visit.

The French President commended Morocco’s “increasing role” and “active diplomacy in Africa,” noting that Morocco and France are both concerned with maintaining stability in the Sahel and addressing development challenges on the continent.

The two countries shall combine their African policies and further work in a partnership way, President Macron said at a news conference after his talks with the King. “It is a mutual chance”, he underlined.

The French President hailed Morocco’s win-win partnership approach, pointing out that Rabat and Paris have a common policy in the African continent.

“This policy consists in developing, with the help of private entrepreneurs and educational and cultural milieus, a model aimed at rethinking a balanced relationship in Africa by relying on civil society”, the French President said.
The two countries are driven by the same aspiration to contribute to the continent’s development and growth, President Macron said.

The French Head of State hailed Morocco’s return to the African Union and its coming accession to the Economic Community of West African States (ECOWAS) saying this will contribute to the two countries’ endeavors in the continent.

President Macron who underlined that France is a stabilizing player in the Sahel said that his country aims at boosting growth in Africa through “concrete actions.”

The summit talks covered a set of other topical issues, including the situation in Libya and the Gulf crisis, on which the two countries have converging standpoints.

Regarding the Gulf crisis, the French head of State stressed that both Morocco and France are concerned and endeavor to defuse the crisis.

“Our hope is to facilitate dialogue and clarify all the connections and funding channels of terrorist groups from wherever they come from”, he said.

The Gulf region should remain stable, he insisted, pointing out that “the King of Morocco has spoken with several protagonists. I myself spoke with all the leaders of the region”.

King Mohammed VI has offered his Gulf partners his country’s good offices to reach a calm, franc and comprehensive dialog and addressed messages to several Gulf leaders, including King Salman of Saudi Arabia.

The French Presidency had announced that President Macron held talks with all the heads of state in the region and called for appeasement. These efforts are convergent with the role of mediation that Morocco wants to play, the Elysée said, adding that both leaders are eager to coordinate their actions to be as efficient as possible.

Saudi Arabia, the UAE, Bahrain and Egypt broke off diplomatic ties with Qatar earlier this month, accusing Doha of allegedly supporting terrorism and moving closer to Shi’ite Iran. They banned their airspace and imposed restrictions on trade and movement of persons.

President Macron’s friendship and working visit to Morocco is his first trip outside the European Union and in the Maghreb since his election on May 7, a fact that mirrors the excellent relationship binding the two long-time allies.