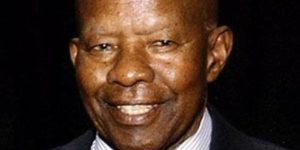 Botswana’s former President Ketumile Masire passed away at the age of 91 on Thursday, the government said in a statement.

“It is my sad duty to formally inform the nation of the passing away of our Former President Sir Ketumile Masire,” Botswana’s President, Lt. General Seretse Khama Ian Khama posted on Facebook.

In remembrance of Sir Ketumile, the President has declared a three day period of mourning, stating from Friday which “shall run through to Sunday June 25, 2017, during which flags shall fly at half mast, as they will also do on the day of the funeral.”

Masire was the first vice-president of Botswana. He went on to lead the landlocked country, taking the baton from the first president Sir Seretse Khama.

The 91-year old Masire who was Botswana’s longest serving president has been praised for cementing stability in the country and laying the foundations for its economic success.

He also got involved in trying to resolve regional disputes, including supporting the anti-apartheid struggle in South Africa.

After stepping down in 1988, he worked as a mediator in a number of conflicts including in the Democratic Republic of Congo.