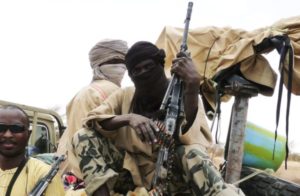 French troops in Mali alongside with the assistance of local security forces have arrested a “key jihadist whose followers have claimed dozens of attacks in the West African terrorism-stricken nation, local media reports.
“I confirm that the terrorist Alhousseyni Ag Assaleh, in charge of logistics for…the group run by Amadou Koufa was arrested on 8 July during a joint operation with Barkhane in the Timbuktu region,” General Salif Traoré told reporters on Sunday.
In his words, the arrest was kept secret until now because of ongoing efforts to capture others elements in his network.
The Macina Liberation Front (MLF), led by cleric Amadou Koufa came to international attention in 2015.
Based largely around the town of Macina in southern Mali, the MLF came to prominence after carrying out a number of attacks since January 2015. The group is thought to have as many as 4,000 members and draws its membership largely from the Fulani ethnic group.
Amadou Koufa has called upon followers to take up arms and revive the 19th century Macina Empire, a Fulani-led Islamist state centred on the Mopti and Segou regions of Mali.
The MLF, in 2015, claimed it carried out the attack on the Radisson Blu hotel in the capital Bamako, in which around 20 people died.
France’s 4,000 strong Barkhane counter-terrorism force in the Sahel is collaborating with regional troops in five West African countries to form a new force to fight desert militants.