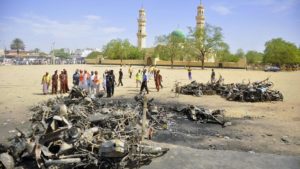 A suspected Boko Haram woman bomber blew herself up and killed 27 others at a market in the village of Konduga near Maiduguri, the capital of Borno State.

According to the regional Emergency Agency, 45 people were “critically injured”. The death toll could be as high as 30.

Two other suicide bombers also blew themselves up at the gates to a nearby refugee camp. No one was killed but many were injured, according to Reuters.

The Nigerian military is still fighting against the terror group, which once controlled large parts of North-Eastern Nigeria and had huge, crowded camps.

The United States earlier this month, approved the selling of 12 light attack aircraft to Nigeria to support the country’s fight against the militant group.

Several officials from the State Department, the Pentagon and the White House said that the sale of the attack airplanes, valued at $600 million, would help the Nigerian Air Force battle the extremist Boko Haram.

Boko Haram, which has allied itself with the Islamic State, has been leading a bloody jihadist insurrection in Nigeria since 2009 that has left at least 20,000 people dead and forced another 2.6 million people from their homes.