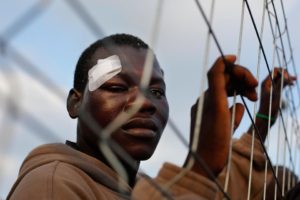 French President Emmanuel Macron hosts this Monday (August 27) a European-African meeting that will focus on ways to address the increasing illegal migration flows to Europe.

The meeting gathers on the African side the Presidents of Niger and Chad, and the head of the Libyan unity government Fayez al-Sarraj, whose countries are at the heart of the transit of migrants from Africa and the Middle East to the European coasts. On the European side, besides President Macron, Spanish and Italian Prime ministers, Mariano Rajoy and Paulo Gentiloni, German Chancellor Angela Merkel, and Europe’s top diplomat, Federica Mogherini, are joining the Paris talks to take stock and harmonize positions on the issue.

The talks aim to “reaffirm the support of Europe to Chad, Niger and Libya for the control and the management of the migratory flows”, the French presidency said in a statement, adding that “The leaders will be presented a roadmap that outlines … what we want to do to tackle all stages of the migrant route”.

The EU had announced a €200 million package to finance projects, geared towards migration in war-torn Libya. The bloc says around €90 million will go to stepping up the protection of migrants and reinforcing migration management in Libya.

According to the United Nations, a total of 125,000 migrants have crossed the Mediterranean by boat in 2017. An estimated 2,400 have died en route.

According to the 39-year old leader, “the idea is to create hotspots to avoid people taking crazy risks when they are not all eligible for asylum.”

However, he later downplayed the plans, saying there were no questions of “hotspots” in Libya if “security conditions are not met”.

According to press reports, the Italian and Spanish officials taking part in the meeting expressed the wish to hold a separate European session to examine European counterterrorism cooperation. The request came in the aftermath of the terrorists attacks that hit several European countries lately.