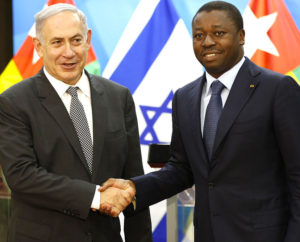 Togo’s embattled president Faure Gnassingbé has requested the cancellation of an Israeli-Africa summit scheduled for October, as the West African nation has been experiencing unrest in recent days, with thousands of protesters demanding presidential term limits and constitutional reforms.

According to Israeli Foreign Ministry, the decision had come at the request of Togo’s president, Faure Gnassingbé, after consultations with Israeli Prime Minister Benjamin Netanyahu.

“The president of Togo has emphasized that elaborate preparations are needed in order to guarantee the success of the event,” Israel’s foreign ministry spokesman Emmanuel Nahshon said.

Talks would continue “to guarantee the full success of the summit,” a statement of the ministry added.

Israeli and African leaders, business leaders and security experts were scheduled to participate in the summit. Benjamin Netanyahu has been seeking partners to lobby the AU to grant Israel observer status.

Gaining observer status would enhance Israel’s relationship with African states and allow it to influence their voting at multilateral institutions such as the UN.

However, a number of African countries were reportedly threatening to boycott the summit.