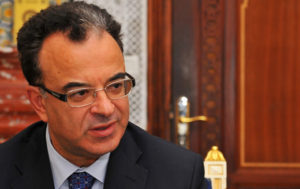 Tunisia’s health minister Slim Chaker died on Sunday after a charity marathon to build a clinic for children with cancer, officials said on Monday.
According to the officials in the ministry, Slim Chaker, 56, fell ill after running some 500 metres in the coastal town of Nabeul. He died of a heart attack later in a military hospital.
Chaker was appointed health minister last month in a major cabinet reshuffle.
A member of Nidaa Tounes, he was the minister of Youth and Sports in 2011 in the government of Beji Caid Essebsi.
Prime Minister Youssef Chahed said he had lost a “brother and colleague”, who had died doing a noble humanitarian act.
Chaker has started his career 1986 at the Ministry of Planning in the North African nation.
He also works in the banking sector, in his capacity as Deputy Director of the Tunisian Investment Bank (1991-1992), Director of Studies at the Textile Technical Center (1992-1998), and the Coordinating Director of the Access Fund to external markets (1998-2008).
Slim Chaker is also an international consultant on the European Program for the Promotion of Exports in Jordan, responsible for the upgrading of the services sector and tourism.
Before entering into active politics, Chaker has studied in Paris at ENSAE (National School of Statistics and Economic Administration) where he became a statistical engineer in 2006. He also obtained an MBA in 2008 from the Mediterranean School of Business in Tunis.