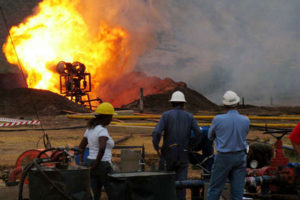 Uganda’s petroleum authority on Tuesday said it expect investments of $15 billion to $20 billion in its oil industry in the next three to four years.
Ernest Rubondo, executive director of Uganda’s petroleum authority made the statement during a conference in Cape Town, South Africa.
The discovery of large oil reserves in Uganda led to widespread expectations to revive the East African nation ailing economy.
Infrastructure construction has started and the government has set up the Petroleum Authority to regulate the industry.
According to Ernest Rubondo, government has already put in place policies and procedures that will ensure Ugandan companies actively participate in the sector’s development.
In August 2016, the Ministry of Energy and Mineral Development issued eight production licences to Joint Venture partners Total E&P Uganda and Tullow Oil Uganda, adding to the one given to China National Offshore Oil Company.
The licensed areas have 5.4 billion barrels of crude out of the overall discovery volume of 6.5 billion barrels. Officials say this amount is just a quarter of the country’s potential hydrocarbons.
Two weeks ago, Uganda has entered into an agreement with Tanzania to help in the search for extra reserves in the Lake Tanganyika. The two countries already have a crude pipeline deal.