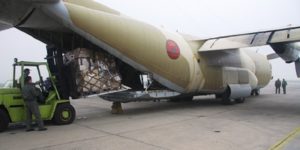 Morocco has dispatch an emergency humanitarian assistance to Madagascar to help it cope with the impact of the devastating tropical cyclone Ava.

The assistance, sent in implementation of Royal instructions, was airlifted by Two aircrafts of Morocco’s Royal Air Force that landed in Antananarivo on Saturday.

The 30 ton-humanitarian aid, made up of tents, blankets and basic foodstuffs, was handed to Malagasy authorities in the presence of Prime Minister, Olivier Mahafaly, and Minister of Foreign Affairs, Henri Rabary-Njaka.

The Malagasy Premier expressed the deep gratitude of the Head of State, the Government and the people of Madagascar to King Mohammed VI for this act of solidarity following the damage caused by the tropical cyclone Ava, reported MAP news agency.

He said the King has always shown solidarity with Madagascar in difficult times, recalling that only a few months ago, the Monarch gave his instructions to send an emergency medical aid to Madagascar to support the country in its fight against a pneumonic plague epidemic.

This solidarity reflects the excellence of relations of partnership and fraternal ties between the two countries, PM Olivier Mahafaly pointed out.

This humanitarian assistance is part of Morocco’s sincere friendship, fruitful cooperation and effective solidarity with this brotherly country, as highlighted during the historical visit of King Mohammed VI in December 2016, the Moroccan Foreign Ministry had said in a statement announcing the dispatching of the aid.