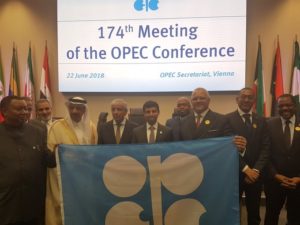 The Ministry of Hydrocarbons for the Republic of the Congo has announced that the country has become the fifteenth member of the Organization for Petroleum Exporting Countries (OPEC).

As the fourth-largest producer of oil in sub-Saharan Africa, Congo wants to increase its oil production this year to 300,000 barrels a day, the Minister of State and chief of staff to the head of state said earlier this year.

At a rate of 300,000 barrels a day, according to the Hydrocarbons Ministry’s projections, the country forecasts an annual production of 117 million barrels.

Angola and Nigeria are OPEC’s other sub-Saharan members, while Algeria and Libya make up its North African contingent.

In 2016, Gabon became OPEC member. Equatorial Guinea joined the organization at the end of 2017. Last year, the country was amongst 11 non-member countries that joined OPEC members in production cuts of 1.8 million barrels of oil per day.