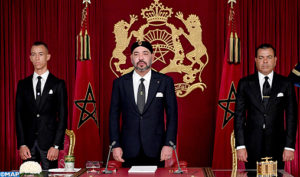 King Mohammed VI has outlined a roadmap for an in-depth, thorough restructuring of national social welfare programs and policies, and called on the Government and all the stakeholders concerned to engage in the endeavor.

This came in the speech the king addressed to the nation Sunday on the occasion of Throne Day, celebrating this year the 19th anniversary of his coming to power.

“We can be satisfied with and take pride in what Morocco has achieved and what Moroccans have accomplished over the last two decades. Yet, I cannot but feel that something has been missing in the social domain,” the King said, vowing “to continue to work actively and resolutely in this field, and to seek to identify and address weaknesses together”.

King Mohammed VI called for an in-depth rethinking of public action to put it at the service of the citizen, pointing the finger at the shortcomings that affect the effectiveness of various public actors, primarily political parties, regarding their interaction with the citizen and their role as local mediators.

“Achieving goals, redressing imbalances and tackling economic and social problems require collective action, planning and coordination between different institutions and actors, especially between the members of the government and between the political parties forming the government.”

The King stressed the need to rise above temporary differences, seek to improve the performance of public administration and ensure the proper management of institutions in order to enhance trust and promote serenity within the community and among all its components.

“Citizens’ affairs cannot be put on hold for they do not relate to a specific period of time. Responsible political bodies are those that stand by the citizen, in good times and bad,” he said.

Although political parties make efforts to carry out their mission, they should attract new elites and mobilize young people to engage in political life, for today’s youths are the ones who know what the current problems and requirements are, he explained, urging political parties to find the ways and means to revitalize their work methods.

Political parties and institutions are expected to respond on a permanent basis to the citizens’ demands and to react immediately to events and developments occurring in society, even anticipate them, instead of letting situations deteriorate, as if they are not concerned by what is happening.

In his speech that he delivered from the northeastern city of Al Hoceima, King Mohammed outlined the major axes of the new economic and social roadmap and commended the new initiative to set up a “consolidated social register”, saying it is a promising start for the gradual improvement of social welfare programs over the short and medium terms.

“This is a national registration system to identify families that truly deserve to benefit from social assistance programs,” he said, describing the register as “a strategic and ambitious social project which concerns large segments of the Moroccan population”.

The Monarch called on the Government and all the stakeholders concerned to undertake an in-depth, thorough restructuring of national social welfare programs and policies and to submit proposals for their evaluation.

Until this reform effectively bears fruit, the king urged the Government to adopt, as soon as possible, a set of provisional social measures, and to inform him regularly on the progress made.

To make sure impacts of the reforms are tangible and felt directly, King Mohammed VI strongly recommended laying emphasis on a set of urgent initiatives, including in the field of education, health, and human development.

The Monarch also called the Government to carry on social dialogue with labor unions, insisting that social dialogue is necessary and that it should be an ongoing process. “The government should meet with trade unions and talk regularly with them, regardless of the potential outcome of that dialogue.”

King Mohammed VI on the other hand called for the adoption of legislation that facilitates investments through the simplification of administrative procedures.

“I hope these crucial measures will provide a strong, unprecedented incentive to boost investment, create job opportunities, improve the quality of services offered to citizens and reduce foot-dragging which, as all Moroccans know, leads to corruption,” King Mohammed VI went on to say.