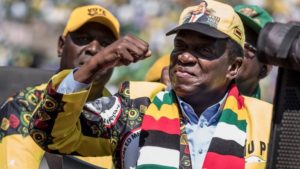 Police removed opposition officials from the electoral commission stage when they rejected the results.

The MDC Alliance has rejected the final tallies and accused election officials of trying to rob them of victory in Monday’s voting. The Alliance indicated it would not accept the results.

The election commission said turnout was high in most provinces, reaching 70% of the over five million people registered in the rolls, but a large number of votes had to be rejected.

In his first reaction soon after the Zimbabwe Electoral Commission (ZEC) declared him winner of the July 30 presidential race, Mnangagwa said he was humbled to have emerged top of the race.

The European Union and Commonwealth missions earlier criticised the delay in announcing the presidential results. This is the first time in 16 years that the government has international election monitors into the country.

The septuagenarian winner said he will call for an investigation into election violence when hundreds of Chamisa’s supporters, angry that the election results were postponed, threw rocks at police outside commission headquarters Wednesday.