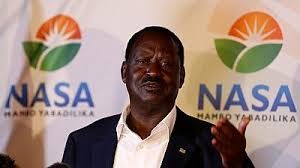 According to AU Commission chairperson, Moussa Faki Mahamat, Odinga’s appointment is part of the African Union’s drive to expedite the integration of the continent through infrastructure, in order to promote economic growth and sustainable development.

He praised the NASA leader’s strong commitment to the ideals of Pan-Africanism and African integration.

Odinga has served as Prime Minister of Kenya from 2008 to 2013. He has held important ministerial portfolios, including Energy, Roads, Public Works, and Housing between 2001 and 2005. He lost a contested election to Kenyatta last year. The anti-government protests that followed the election killed or injured dozens of people.

Odinga’s mandate at the AU will include mobilizing further political support from member states and regional economic communities and facilitating greater ownership by all concerned stakeholders on the continent.

He is expected to pay particular attention to the missing links along the transnational highway corridors identified as part of the Trans-African Highways Network, with a view to facilitating their development and modernization.

The envoy will also focus on the continental high-speed train, which is one of the flagship projects of the First Ten-Year Implementation Plan of Agenda 2063.