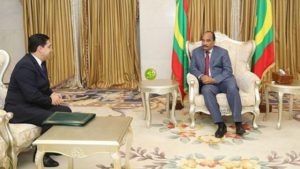 Morocco’s foreign minister Nasser Bourita said in Mauritanian capital Nouakchott last week that the two countries have a common willingness to foster their bilateral ties, a statement that comes after years of uncertainty.

The visit comes at a particular context ahead of the round table on the Sahara to be held in Geneva early December under the auspices of the UN. The round table will be attended by the main parties to the Sahara conflict, Morocco and Algeria in addition to Mauritania and the Algerian-backed Polisario separatist group.

Last September, Mauritania’s foreign minister Ismail Ould Cheikh Ahmed paid a visit to Rabat during which it was agreed to convene next year the Moroccan-Mauritania Joint High Commission, which has not met since 2013.

Long considered as having an ambiguous stand on the Sahara issue, Morocco’s southern neighbor, Mauritania, made its neutrality clear by calling for a consensual solution to the over-four decade conflict.