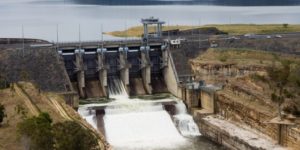 The African Development Bank (AfDB) has approved two loans worth €235.763 million for the completion of a dam on Thwake River in southern Kenya.

According to the bank, the loan was requested by Kenyan authorities as an additional support to a €76 million loan granted by the Bank in 2013 to start building of the dam, which aims to provide drinking water, hydroelectric energy and irrigation.

The project is being carried out by China Gezhouba Group Company (CGGC). The Thwake dam will be 80.5 meters high. After its completion, it should be able to store 681 million m3 of water. Only 22 million m3 will be used to produce drinking water. Some of this will get channeled towards irrigation efforts, officials said.

A water treatment plant should be built. It will have a capacity of 151,800 m3 per day. This amount of water can supply 674,700 people in rural areas and up to 117,200 m3 for 640,000 people living in cities, most notably Konza Technology City, a smart city that is undergoing rapid growth some 160 kilometers south of Nairobi, Kenya’s capital.

Construction in the initial phase of the TMWDP project should be completed in December 2022. At the moment, very little information is available on the electricity that will be produced from the Thwake Dam.