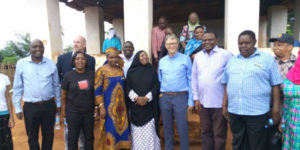 As the African Development Bank joined the international community to observe World Toilet Day on November 19, the organization is putting considerable financial muscle into the global effort to improve toilets, and sanitation in general.

The Bank partnered with the Bill and Melinda Gates Foundation and other multilateral development institutions in Beijing, 6-8 November in what was billed as the Reinvented Toilet Expo (RTE), a global search for more sanitary, healthier, and even lucrative solutions to the enduring challenge of human waste disposal.

The Bank announced a new initiative to promote innovation and inclusive sanitation services for sub-Saharan Africa’s urban inhabitants at the Beijing Expo. The Bank’s Africa Urban Sanitation Investment Fund Program, with support from the Gates Foundation, is funding the initiative designed to focus on the poor.

The AfDB aims to establish the first African Urban Sanitation Investment Fund (AUSIF). The program builds on the partnership between the Gates Foundation, the African Water Facility and the African Development Bank started in 2011. The Bank and African Water Facility are committed to raising at least $ 500 million in new, inclusive sanitation investments for the AUSIF from public and private sources. At least 30 percent of those resources will finance non-sewered sanitation innovation that directly serves low-income communities.

This partnership with the Gates Foundation and other development organizations will enable the African Water Facility, an initiative of the African Ministers’ Council on Water hosted by the Bank, to structure the AUSIF to leverage public and private sector investment. It would also enable the fund to build a pipeline of projects under a new set of sanitation investment principles called City Wide Inclusive Sanitation (CWIS).

Figures collected by the World Health Organization show that about 800 million people in Africa lack access to basic sanitation.