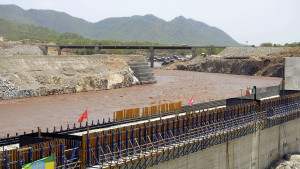 In Addis Ababa, the parliament has decided to replace the treaty written by Britain in 1929, which gave Egypt veto power over projects in the upstream of the Nile.
It is one of the latest actions following the exchange of words between Egypt and Ethiopia over the construction of the Grand Renaissance dam. Speaking in the parliament, Ethiopian minister of water and energy Alemeyehu Tegenu, informed parliament that the government has made two main decisions pertaining to the Dam. One concerns the postponement of the ratification of the new cooperation agreement for a year, while they wait on Egypt to elect a government, and the second is about allowing experts from Egypt and Sudan inspect the dam project. Minister Alemayehu Tegenu said the decisions were made based on “cooperation and friendly spirit”.
Nkosazam Dlamin Zuma, the head of African Union, has urged the parties to cooperate and find a solution to the issue. Ethiopia has claimed that a commission composed of Egyptians, Sudanese and Ethiopians have reported that the dam will not “significantly affect” water flow to Egypt and Sudan. Sudan said it accepts the outcome of the finding and this week announced that it supports Ethiopia’s project but Egypt has been adamant that all options are open to stop the project. Egypt has also pointed out that it doesn’t agree with a clause in the new cooperative agreement signed by several countries, with the ambition of setting up a commission to oversee Nile projects.
It argues that the clause “not to significantly affect the water security of any other Nile Basin State” with regards to projects on the Nile should be not to “adversely affect the water security and current uses and rights of any other Nile” states.