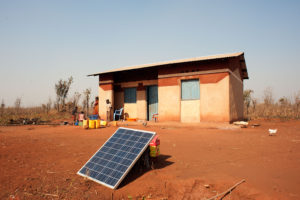 Namibian government plans to use renewable energy to reduce the national energy deficit in the long term, Minister of Mines and Energy Tom Alweendo said.

The energy produced by renewable power plants is an excellent way for the country to address its short-term energy deficit, pending the implementation of long-term plans, Alweendo said.

The cabinet approved several updated and new policy documents to meet the short- and medium-term energy demands as well as other related challenges in the energy sector.

“The Government of Namibia has recognized the importance of renewable energy not only for the grid power generation but also to contribute in bridging energy gaps,” he said.

He stressed that despite making frantic efforts to improve generation capacity through various means, unavailability of funds has been a major stumbling block to Namibia achieving self-sustenance of power.

Late last year, the government commissioned a solar plant that will feed an additional 5.78 MW electricity to the country’s national grid, thereby lessening the country’s dependency on imports, which are pegged at around 60 percent.

In October, the Electricity Control Board (ECB) said in a statement that the southern African nation is gearing up for a renewable energy revolution and plans to continue deploying modern renewable energy systems onto their national grid.

The government’s target is to provide 70 percent of the country’s energy mix from renewable resources by the year 2030.