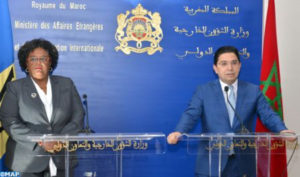 Barbados’s decision was announced Friday during the visit of the Caribbean island nation’s Prime Minister Mia Amor Mottley to Rabat.

Latin American countries have been correcting their stands one after the other with Salvador being the latest to join the wave of anti-separatists.

Barbadian government said it will join 162 countries across the globe that do not recognize the Polisario.

In doing so, the Caribbean island nation aligns with international efforts to resolve the regional Sahara conflict within the framework of the UN.

Barbuda also commended Morocco for its efforts to reach a political solution and for cooperating with the UN Secretary General and his personal envoy in order to find a mutually acceptable solution.

Over the last years, support for the Algerian-sponsored separatist thesis in the Moroccan Sahara has been waning as more than 46 countries have withdrawn their recognition of the SADR entity out of 80 that previously recognized it in a Cold War context.