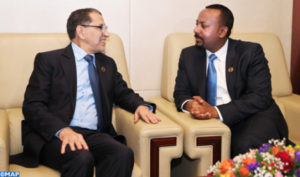 The talks, held on the sidelines of the 33rd ordinary summit of the African Union, provided an opportunity to highlight the good relations between the two countries, and discuss means to speed up the pace of implementing joint projects, Othmani told reporters in Addis Ababa.

The two countries seek to strengthen their relations, particularly in the economic field, he pointed out, recalling that several joint projects are underway while others are planned.

The Moroccan official also stressed the need for the two countries to diversify their economic cooperation, particularly in the areas of fertilizers, agriculture and renewable energy.

The two countries are linked by numerous agreements signed on the occasion of His Majesty King Mohammed VI’s visit to Ethiopia in 2016, he said.

“So we have a roadmap to develop our relations in several areas,” he said.