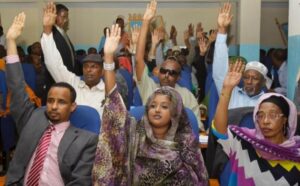 The lower house has just approved a bill providing for a 30% quota for women in the Somali parliament. Although the parliament has yet to ratify the bill, it is one more step towards the feminization of politics in Somalia.

It is a long-term struggle in a society that is both patriarchal and traditionalist, but progress is visible. In the early 2000s, women accounted for only 8% of parliamentarians. By 2012, they were 14%. Today, 80 women sit in both houses of parliament, almost a quarter of the positions. But the 30% mark, which has been debated for years, has never been crossed.

With this promising vote, activists hope to break the glass ceiling. The text was approved by a large majority, with only seven votes against, proof of a change of mentality, even if there are some disgruntled people.

Actually, some men with political ambitions see the gender quota as an obstacle that could thwart their plans.

It remains to be seen whether this text is endorsed, and to what extent it is applied.