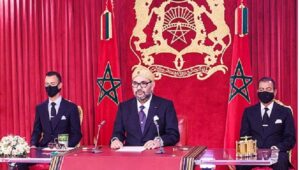 King Mohammed VI of Morocco has pointed out that the battle against the COVID-19 epidemic is not won yet and that these are difficult, unprecedented times for everyone.

“Despite the efforts made so far, we have not yet won the battle against this epidemic. Needless to say, these are difficult, unprecedented times for everyone,” said King Mohammed VI in a speech he delivered Thursday evening on the occasion of the 67th anniversary of the Revolution of the King and the People.

The Monarch recalled that Morocco was cited as an example for complying with the preventive measures taken and for the positive results achieved during the lockdown period, measures that resulted in the low number of deaths and the small number of infections compared to many countries.

“Regrettably, with the lifting of the lockdown, the number of infections has increased significantly, for many reasons,” he deplored, explaining that “there are people who claim that this epidemic does not exist. There are those who believe that the lifting of the lockdown means the epidemic is over, while others are behaving in an unacceptably lax and careless way.”

With the relaxation of the lockdown, a number of preventive measures were taken to preserve the safety of the citizens and curb the spread of the epidemic. Nonetheless, we have been surprised to note an upsurge in infections, the King deplored.

“The deterioration of the health situation today is unfortunate and does not leave much room for optimism. Whoever tells you otherwise – Dear Citizens – is simply lying to you.”

Once the lockdown was lifted, the numbers of confirmed cases, severe cases and deaths have increased more than threefold over a short period of time, compared to those registered during the lockdown.

“It must be emphasized, in this regard, that the disease is very much real. Those who claim otherwise are not only putting themselves in harm’s way, but they are also endangering the lives of their relatives and of others,” he said, adding that “It should be noted that in some patients, symptoms appear after 10 or more days. What is more, many infected individuals are asymptomatic. This increases the risk of spreading the infection and therefore requires greater vigilance.”

Besides, he added, many people do not respect the protective measures advocated by the government authorities, and which include the wearing of masks, social distancing, hygiene and the use of disinfectants.

Had hygiene and cleaning supplies not been available on the market, or had they been expensive, such behavior might have been understandable. However, the government authorities have made sure these materials are abundantly available and are very reasonably priced.

The State has also subsidized facemasks and encouraged their manufacturing in Morocco so they can be accessible to all, the Monarch recalled.

“In fact, that behavior on the part of some people runs counter to the values of patriotism and the spirit of solidarity, for patriotism requires, first and foremost, that we care for the well-being and safety of others. As for solidarity, it is not limited to financial support. In a context such as this one, it implies, above all, a commitment not to spread the infection among people,” he went on to say.

Moreover, such conduct undermines government efforts – those which have enabled us, by the Grace of the Almighty, to provide assistance to many families that have lost their livelihoods.

However, he warned, that assistance cannot last forever, for the State has already exceeded the means and resources available to it.