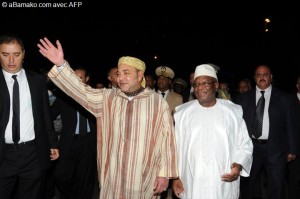 Morocco’s King Mohammed VI is taking part this Thursday in the inauguration ceremony of the newly elected president of Mali Ibrahim Boubacar Keita.
Besides the fact that the king’s participation in the swearing-in ceremony is a première, the visit as such is highly symbolic, and for reason.
This first visit by King Mohammed VI to Mali is actually taking place
while Mali is just emerging from the worst politico- military crisis in its modern history. In early 2012, after a military coup d’Etat, Tuareg separatists and well-armed Muslim jihadists gradually occupied large parts of Northern Mali and threatened few months later to advance on capital city, Bamako.
Morocco played then a crucial role, along some other countries, in liberating the West African country from the grip of jihadist groups. Morocco backed all efforts of the world community to dislodge the terrorist groups and played a decisive role when it was chairing the UN Security Council in December 2012 in passing the resolution allowing a military intervention to drive back the Jihadists, re-establish control over the occupied territories and restore the country’s unity and sovereignty. Morocco also extended France, which was spearheading the military intervention, the necessary logistical support it needed when it sent its air force jets and combat troops to participate in the liberation of the country.
So, the presence of the King in the Malian presidential inauguration ceremony is a token of Morocco’s commitment to a unified, stable and sovereign Mali. The royal visit also translates Morocco’s keenness to help Mali return to normal and renews, if need be, Morocco’s attachment to the centuries-old cultural and spiritual ties binding the two states and the two peoples.
Besides its political support to the West African country, Morocco is also very active when it comes to economic and humanitarian solidarity with Mali and with many other African countries as well.
After the military coup of March 2012, Morocco multiplied humanitarian initiatives to alleviate the suffering of thousands of Malians who fled the extremist and separatist groups southwards or who sought refuge in neighboring countries, sending tens of tons of food, tents, blankets and other survival kits.
Morocco also evidenced its multidimensional solidarity with Mali through financial contributions to the development efforts of the African country.
And when Mali was hit last August with severe floods, Morocco sent a humanitarian assistance to the flood-stricken populations and no later than last Friday, it set up a military field hospital in Bamako to provide medical care and drugs to the population, still suffering from the impact of the crisis.
All these initiatives therefore reflect the king’s conviction that social and humanitarian actions can greatly help in the democratic transition process initiated in Mali and translate his commitment towards Africa as a whole.
And it is probably
The king’s participation in the inauguration ceremony is therefore meant to emphasize Morocco’s involvement in the settlement of the Malian crisis and also its historical and geopolitical responsibility in preserving security and stability in the Sahara-Sahel area, which is part of the kingdom’s strategic depth.