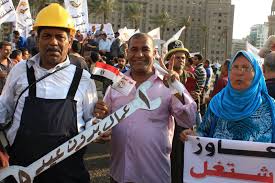 “There will be a third revolution” if the government doesn’t satisfy the demands of the Egyptian Federation of Independent Trade Unions (EFITU) warned President Malek Bayoumi of the federation. The government is being urged to review the wages after promises that it will be increased minimum wages from 700 Egyptian pounds to 1200 in 2014. While the public sector considers it insufficient, those in the private sector are upset that they have been sidelined. The union has dismissed Prime Minister Hazem el-Beblawi’s proposal.
Many are surprised that the government wants to only increase the minimum wage. Some activists are skeptical of the decision. They claim that it is a tactical move to gain more time for negotiations because the government is focused on the Muslim Brotherhood. Hossam el-Hamalawy, a prominent labor activist and revolutionary, said “it’s just to postpone the fight with the workers till January” because by then, “they will have killed off the so-called terrorists, and then they can turn their full attention to the workers.”
EFITU was founded during the revolution against Mubarak. It played a crucial role in ousting Mubarak and Morsi from power. President Bayoumi said “I’m warning the government… to comply with the workers’ demands.” The failure to honor their demands will lead to “a third revolution – in the factories, in the government, everywhere.” A deadline has not been set.
The government has not reacted to the comments of the federation’s president.
Hamalawy said the actions of ETIFU could have negative effects on the government like they have done with the past regimes. He stated that “the labor movement is the biggest threat to any government” with its mass strikes.
Egypt’s economy is struggling with almost 67% of its workforce employed by the private sector