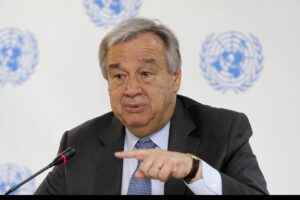 The UN warned the Polisario from blocking the border crossing between Morocco and Mauritania as the Algerian-backed separatist groups sends a convoy to the demilitarized border strip in a new provocation.

The warning came after images shared on social media showed a convoy of so-called civilians loyal to the Polisario and protected by armed militiamen heading to the Guerguarat strip to “permanently” block the crossing.

The crossing is vital for Morocco’s trade with the rest of Africa and has been the target of multiple provocations by the Polisario militias in utter violation of the 1991 UN-brokered ceasefire agreement, which identified the area as a demilitarized buffer zone.

The UN also reiterated its call to the Polisario to abstain from altering the status quo of the strip beyond the Moroccan-built security wall, which also covers the Guerguarat crossing.

The Polisario, in a new maneuver, disguised its provocation as a civilian protest.

Moroccan media spoke of reinforcements by the Royal Armed Forces in the area and visits by senior army officials to the security wall.

Morocco and the Polisario, backed by Algeria, fought a guerrilla warfare with the separatist militia using hit and run tactics that came to an end after Morocco achieved its fortified security wall.

Observers see the new provocation in the Guerguarat as a means to cover the disarray within the Polisario ranks as support for their separatist quest wanes both within their rear base in Algeria’s Tindouf and globally.

The Polisario, thrown into the oblivion of continental and international politics, is aware that its Algerian sponsor is in severe economic and political hardship and that over two-thirds of African states support openly Moroccan sovereignty over the Sahara.

However, no one can predict what may happen if the MINURSO fails to stop the convoy from reaching the border crossing. Morocco has warned in 2017 that blocking its border crossing with Mauritania would amount to a casus belli triggering a severe response.