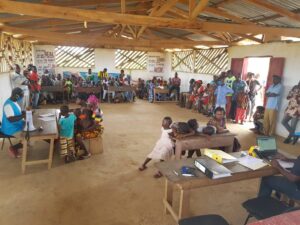 As political and community violence flares up in Côte D’Ivoire following the controversial election of Alassane Ouattara for a third term, thousands of people have fled the country.

According to the UN High Commissioner for Refugees, as a sign of the growing concern of the population, the violence has caused the exodus of 8,000 Ivoirians this week, compared to 3,200 a week ago.

Since Monday 9 November, at least a dozen people have been killed and dozens more wounded in several localities in central-eastern Côte d’Ivoire. More than 50 people have lost their lives since the beginning of August in political violence that is increasingly taking a communal turn.

In Mbatto, in the Moronou, most of the inhabitants stayed holed up at home, on Tuesday, hoping that the shooting of hunting rifles would calm down. The day before, the town was set ablaze. A demonstration against Alassane Ouattara’s third term degenerated into clashes between the Agni and Malinké communities. These clashes, unheard of in this city of some 30,000 souls, left at least three people dead and 26 injured, several of them seriously.

In addition to this provisional toll, there is also the one in Daoukro. Henri Konan Bédié’s stronghold was again crossed on Tuesday by the violent convulsions of the day before. “There are barricades everywhere. There is no life. It’s a dead city,” said one witness. The gendarmerie and police forces are trying as best they can to prevent the conflagration that the town experienced on Monday.

According to the prefecture, at least six people were killed in Daoukro. Among them, one was beheaded and another burned. Dozens of injured are also to be deplored.

On Monday, the locality of Elibou, north-west of Abidjan, experienced violence that left three people dead. Demonstrations and tensions were also reported in Yamoussoukro, but no deaths were reported.

On November 4, member of the opposition Guillaume Soro said in a speech from France that President Alassane Ouattara is running a dictatorship system and called the army to rise against Ouattara.

“I ask you soldiers, non-commissioned officers, senior officers and general officers of our army, to look at yourselves in the mirror of your soul and your conscience and to act to stop the killings, to preserve our country from pogroms, to preserve peace and harmony. Take action to restore our Constitution,” he said.

The Ivoirian authorities condemned Soro’s statements saying they are of ”extreme gravity” and suggest the preparation of a coup. “We are surprised that such statements are made on French territory and we hope that the French authorities will react,” said Mamadou Touré, the deputy government spokesperson.

The Ivoirian opposition boycotted the election of October 31, 2020 and demanded that a civil transitional government be put in place.

As a reminder, opposition leaders Henri Konan Bédié, Pascal Affi Nguessan, Assoa Adou, and Mabri Toikeusse, who reject the re-election of Alassane Ouattara, have been assigned to residence since November 3. The Ivorian government has decided to take legal action against them for acts “of insurgency, attacks, and conspiracy” after they announced the creation of a National Transitional Council chaired by the former Head of State, Henri Konan Bédié.