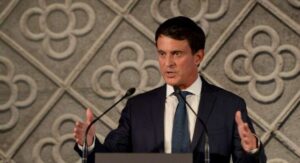 Former French PM Manuel Valls has warned against the Polisario separatist front which constitutes a real threat to the Sahel because of all the trafficking it conducts in the area.

The Polisario is involved in the trafficking of arms, human being, and drugs and represents therefore a real threat to security in the Sahel region, said on Friday the former French Prime Minister.

Valls, who was the guest of Spanish TV Channel “Antena3”, described as “irresponsible” the positions of Podemos, a minority party in the Spanish coalition government, on the Moroccan Sahara and the separatists, knowing, he said, that “the Polisario is involved in the trafficking of arms, human beings and drugs in the Sahel region”.

“One should not sing offstage,” Valls warned, calling on the Spanish government to “be responsible and to take up the challenges facing the country and Europe”.

The former French PM also spoke of Morocco’s position as an important ally for Europe.

“Morocco is a major ally in the fight against terrorism and Jihadism which constitutes a great challenge for Europe”, Valls pointed out.

“We have thousands of radicalized people in our countries, for this reason we need the collaboration of African countries, and more particularly of Morocco”, he noted in this regard.

Two members of the Spanish cabinet, namely the Foreign Minister Arancha Gonzalez Laya and the Defense Minister Margarita Robles, have both reacted to a statement on the Sahara by Secretary General of the Podemos party, which is part of the Spanish Government coalition.

They both said that Spain’s official position on the Sahara issue is decided by the Ministry of Foreign Affairs and by the Presidency of the Government.

“The position of the Spanish government regarding the Sahara is very clear and has not changed over the past few hours, days or weeks,” said the Foreign Minister.

“Any member of the government can have his own opinions, but the government is a collegial body and must be at the forefront of the positions taken,” said on her part the Defense Minister, insisting that “being part of a government also requires responsibility.”