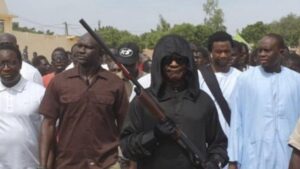 Scandal in Senegal after the arrest, between 26 and 28 November, of around forty people in “reform centers” of the marabout Serigne Modou Kara Mbacké, religious leader of the Mouride brotherhood, and also a political figure. According to the gendarmerie, young people were victims of “kidnapping, ill-treatment and even torture” in these centers located in Dakar and its suburbs. An investigation is underway.
His disciples call him “General” and parade dressed in white, as they did last November 11th in Thiès. Trained in several “re-education” centers, they “do sports and study the Koran”, according to the words confided on Monday 30th November by a communication manager of Serigne Modou Kara Mbacké.
Since 2006, these centers have aimed to “put back on the right path of “problem” young people, delinquents or drug addicts brought by their own parents,” he continued. For the relatives of the religious guide, also head of the Truth for Development Party, the arrests in recent days are part of a “political cabal”.
But the gendarmerie talks about “human trafficking”. It all started with an investigation into a scooter theft. One thing leading to another, on four sites, the gendarmes discovered individuals who were “victims of severe malnutrition”, “in deplorable sanitary conditions”, with only “one meal a day” and “one shower a week”… The victims also reported “several deaths in the last two years”.
In total, between 26 and 28 November, 353 people were “released” according to the gendarmerie. Among them were minors. A press conference by Serigne Modou Kara, announced on Monday 30th November, was finally cancelled. The case is in the hands of the public prosecutor.