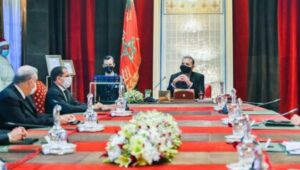 King Mohammed VI has given his high instructions to the government so that all Moroccans get the vaccine against the Covid-19 for free.

King Mohammed VI has given his high instructions to the Government to adopt free vaccine against the COVID-19 for the benefit of all Moroccans, the Royal Office said in a statement this Tuesday.

“This noble Royal gesture draws its essence from the high royal solicitude and human benevolence with which the Sovereign has never ceased to surround all the components of the Moroccan people since the appearance of the first cases of this virus in Morocco,” the statement said.

It is also part of the royal guidelines aimed at launching, in the coming weeks, a massive vaccination operation against this epidemic. It aims to guarantee the vaccine for all Moroccans as an adequate means to immunize themselves against the Virus and to contain its spread in the perspective of a gradual return, of the citizens to their normal life in peace and security, the statement added.

King Mohammed, who had been continuously monitoring the evolution of this pandemic and the measures taken to fight its spread and protect the health and safety of citizens, had chaired on November 9 a working session devoted to the vaccination strategy against Covid-19.

It was then announced that Morocco would launch a massive vaccination operation against Covid-19.

On the basis of the opinion expressed by the ad hoc National Scientific Committee, which stressed that the vaccination campaign is a genuine response to end the acute phase of the pandemic, and faithful to the proactive royal approach adopted since the appearance of this virus, the Monarch gave his guidelines for the launch, in the coming weeks, of a massive vaccination operation against Covid-19, the Royal Office had said after King Mohammed VI chaired a working session dedicated to the vaccination strategy against the coronavirus.

According to the results of clinical studies already completed or still underway, the safety, efficiency and immunogenicity of the vaccine have been proven, the Royal Office had said.

The immunization operation, in a two-injection vaccination schedule, should target citizens over 18, the statement said, explaining that Priority will be given in particular to front-line staff, in this case health workers, public authorities, security forces and national education workers, as well as the elderly and people vulnerable to the virus. The campaign will be later extended to the rest of the population.

Morocco has been able to occupy an advanced rank in the procurement of Covid-19 vaccine, thanks to the Sovereign’s initiative and personal involvement, which led to the successful participation in the clinical trials.