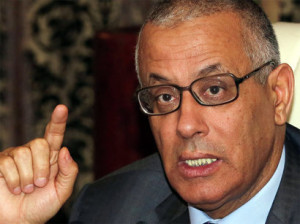 Prime Minister Ali Zeidan has told Libyans that the sieges of oil ports “is getting dangerous” after the government decided to allocate $7billion of its foreign reserves as compensation of such actions in order to continue functioning. Militias and tribesmen have refused to free oil terminals unless their demands are met. The 10-day ultimatum issued by the government last month has expired without any major event.
Libya now exports only a few thousand barrels per day. It is losing millions in revenue and the militias are showing no sign of leaving the terminals. Instead, calls for a federal system of government are being echoed. Militias in the east believe such a system will protect their interest after being marginalized by the past regime. During Libya’s monarchy days, it used to be governed federally from 1950 to 1963.
Zeidan stated that the allocation of $7billion from its foreign reserve and the need for an extra $6billion to compensate the closure of terminals should “show to people how this is getting dangerous”.
Fresh blockades of fuel supplies to the vital Sarir power station in South coupled with the ongoing strikes by employees of another Sarir power station in the West could plunge many Libya cities in total blackout unless if a solution is found before weekend.
Zeidan has maintained that the government does not want to cause “bloodshed” nor will it “stand with its hands tied forever” as the situation worsens. Libya lacks an effective security force and the government’s authority continues to be challenged.
The Eastern region continues to be violent and targeted killings have increased. In the latest attack there, a hand grenade killed a senior officer when he was driving in his car, a security official said.