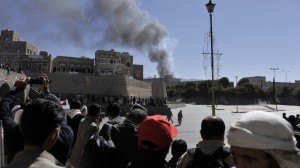 A car bomb has shaken the defense ministry of Yemen and left more than 50 people dead and almost 200 people injured. The explosion of the bomb was followed by gunshot exchanges between the army and armed men. None of the groups have claimed responsibility of the act which has already attracted international criticism and condemnation.
The attack seems to be well planned. Mansour al-Zindani, a spokesperson from the main opposition party al-Islah Coalition, said the car bomb took place at the western entrance to the ministry while gunmen advanced from the eastern part. The exchange of fire lasted for a couple of hours. Some gunmen are believed of still being trapped inside the ministry.
At least 52 people have been killed and 167 wounded. Zindani strongly believes that the use of rocket propelled grenades and a car full with explosives indicates that the attack was the work of Al-Qaeda in the Arabian Peninsula (AQAP).
AQAP, considered as the most dangerous terrorist group in Yemen by the U.S, has not made any statement regarding the attack. The group is well known for killing officials.
Security measures were last week as Yemen continues to experience a turbulent politicala transition. To prevent “shoot and scoot” attacks, the government on Sunday started enforcing a temporary ban on motorbikes in the capital during national dialogue sessions aimed for reconciliation.
Independent parliamentarian Abdulaziz Jabari opined that “dissatisfied gropus” of the national dialogue could also been behind the attack. He said such groups “don’t want to see reconciliation happening”.
The interim government is currently is faced with multiple challenges. It is grappling with southern secessionists, al-Qaeda-linked militants and northern Houthi rebels, as well as economic issues inherited from Saleh’s rule.