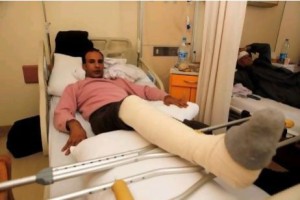 Jordan has called on Libya to pay up its hospitals bills after it has treated wounded citizens of the revolution. Fawzi Hammuri, head of Jordan’s Private Hospitals Association, claims that Libya owes Jordan more than $105 million after “around 40 out of Jordan’s 60 private hospitals treated more than 55 000 Libyans in the past six months” with some others still undergoing treatment in public hospitals. This sum doesn’t include an estimated $100 million due to Jordanian hotels by the Libyans too.
Jordan supported the Libyan revolution againt Muammer Gaddafi and the Kingdom’s position was supportive of the Libyan people since the early days of the revolution, both at the individual level by sending humanitarian and medical aid and treating the wounded in Amman, and as part of its regional and international role.