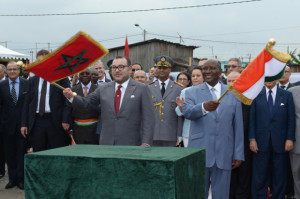 Morocco has called on the African continent to take its destiny in its own hands and to enhance south-south cooperation that should be at the heart of inter-African economic partnerships.
The call was launched by the King of Morocco Mohammed VI during a Moroccan-Ivorian economic forum held in Abidjan February 24-25.
The King who underlined the key role economy plays nowadays in the consolidation of inter-states political relations said Africa should learn to trust Africa and the continent’s wealth should benefit African peoples in the first place.
Africa should no longer remain shackled by its past and its current political, economic and social problems. It must look to the future with optimism and resolve and make the most of its strengths and potential, he said, urging Africa to take up the many challenges threatening its political stability and hindering its socioeconomic development.
He pointed out however that these challenges can only be met through cooperation, solidarity between African peoples, and respect for the States’ sovereignty and territorial integrity.
The king also pleaded for boosting triangular cooperation as an innovative tool that offers many opportunities, facilitates joint efforts, and helps achieve optimum use of resources.
As Morocco is a pioneer in this cooperation mechanism, the King said his country “is willing to put its credibility and the trust it enjoys with its partners at the service of sister African nations.”
After he underlined the importance of economic development, trade and regional integration in the continent’s development, he said that “a vibrant, developed Africa is not merely a dream for tomorrow. It can be a reality today, provided we take action.”
He also underlined the crucial role of the private sector in upgrading relations between states and in contributing to the development of the continent, stressing the need to mobilize resources, to boost private enterprise and to expand small and medium-sized businesses and industries, which are the continent’s real engine of growth and the main job provider for its young people.
“For sustainable development to take place in Africa, the creativity and dynamism of the private sector should focus on specific promising areas such as agriculture, industry, science and technology, and infrastructure development,” he said.
King Mohammed VI, who is visiting Cote d’Ivoire part of a new African tour that took him last week to Mali and will take him later to Guinea and Gabon, also said that “leveraging South-South public-private partnerships and the transfer of technology are key elements in this respect. This makes institutional capacity-building in African States a strategic objective. Better governance, progress based on the rule of law and the peaceful settlement of conflicts must constitute shared priorities.”
Expressing optimism as to the existence of new prospects for the achievement of prosperity for future generations, he said “this objective will be even more readily attainable when Africa overcomes its Afro-pessimism and unlocks its intellectual and material potential as well as that of all African peoples.”
Morocco, which is among the largest African investors in the continent, especially in banking, telecoms, insurance, construction and public works through companies such as Attijariwafa Bank, BMCE, Banque Populaire, Maroc Telecom, Cnia Saada, Addoha and Alliances is determined to boost its relations with African states as evidenced by the King’s numerous African tours.
This month visits to Mali and Cote d’Ivoire highlighted by the signing of several cooperation agreements by Moroccan and Ivorian officials and private sector leaders. These agreements are covering a wide range of sectors (investment, agriculture and fisheries, infrastructure, mining and energy, tourism, trade, pharmaceutical industry, education…)
The visits were also marked by the launch of several development projects in the two African countries, including among others a neonatal care unit, low cost housing projects, and a factory for manufacturing cement packaging bags.