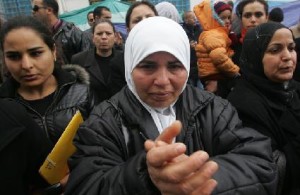 Announcements of results of a national job employment exam triggered a clash in Tunisia between the Tunisian police and jobless protesters in resources-rich central Gafsa region, one of the poorest areas in Tunisia. The local young unemployed demonstrators claimed that the results were tampered with. In retaliation, they brought down a police unit, partially set alight a court building and burnt the local office of Tunisia’s main Islamist party Ennahda. Confirming the attack, Zohra Smida, MP affiliated with the Islamist Ennahda party said “not only our party was burnt down, the building of the court has been set on fire as well,” she said expressing concerns over the region’s deteriorating security.
The center of the country where a street vendor set himself on fire more than three years ago giving birth to the Arab spring uprising, is known for such violence driven by social discontent. Radical Islamists, blamed for the assassinations of two secular politicians last year, have been blamed for the country’s political unrest that pushed the Ennahda-led government to resign last month.
Unemployment, the leading factor behind the revolution that toppled Ben Ali, has long been an issue for Tunisians. 15% of the population is affected while the figure among school leavers is a shocking 30%. Economic growth has been hindered by the political instability, violence emanating from radical Islamists and social unrest. Last year’s growth was recorded at 2.6 percent which compared to 2012’s 3.6 percent growth slowed down.
The people of Metaloui have called on the state for help in create job opportunities for the population. They expressed dissatisfaction over the impoverished state of the region and referred to it as an unbalanced economic regional development.