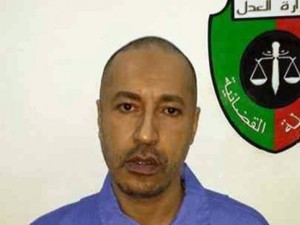 Saadi Gadhafi, one of the sons of the Libyan dictator Muammar Gadhafi who has been handed over by Niger to Libyan autorities, appeared on his country’s state TV asking for clemency and forgiveness of the Libyan people
“I apologise to the Libyan people, and I apologise to the dear brothers in the Libyan government for all the harm I’ve caused and for disturbing the security and stability of Libya”, he said in a footage aired on Libyan TV channel.
“I admit that these things were wrong, and we should not have perpetrated these acts”, he added in a broadcast from jail, while he is awaiting trial for charges of embezzlement and armed intimidation when he was head of the Libyan Football Federation.
He appeared on TV wearing a blue prison uniform with his head shaven and his beard flecked with grey far from the former image of the flamboyant & wealthy playboy.   Unlike his brother Saif al-Islam, who is also in a Libyan jail, the 40-year old Saadi Gadhafi is not wanted by the international criminal court in the Hague. He fled to neighbouring Niger after the fall of his father’s regime in 2011 and he was extradited last month by the impoverished African country under mounting pressure from the new Libyan authorities.
The Libyan government has vowed to abide by the international justice standards during the trial of Saadi Gadhafi. He is accused of shooting protesters and other crimes committed during his father’s autocratic and despotic rule.
He is one of Gadhafi’s seven sons. He is much more known as a businessman and professional footballer with a lavish lifestyle who likes fast cars and women.
Libya’s authorities still struggle to control armed militias which continue to operate across the country committing widespread human rights abuses with impunity, fuelling insecurity and hindering the efforts to rebuild democratic institutions respecting the State of law.
Thousands of prisoners from the war in 2011 continue to languish in prison without trial. Allegations of torture by the militias guarding them are widespread.