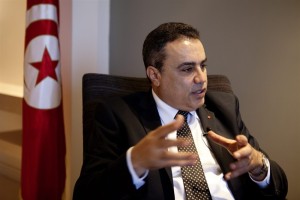 The outgoing Prime Minster of the independent technocratic government Mehdi Jomaa has signaled that despite the efforts to combat terrorism in the country, the threat still persists. He also mentioned that Libya poses a threat to the country’s stability and security. Jomaa became Prime Minister after terrorists assassinated two important opposition figures which led to an outcry against the then government.

Prime Minister Jomaa was speaking to The Associated Press of the challenges facing Tunisia as his government prepares to make way for President Essebsi and his entourage. He said that the ongoing war in Libya has obliged Tunisia to constantly monitor its 450kilometre border with the country. He pointed out that Tunisia has been able to reduce terrorism on its territory. Islamists threatened to disrupt the recently concluded legislative and presidential elections that capped the country’s transitional process.

Tunisia’s military has often been attacked by terrorists in the mountains along its border with Algeria. Both countries have boosted their presence in the area. During Ramadan, independent Tunisia suffered its highest military lost in a day when terrorists killed 14 soldiers in an attack in Mount Chaambi.

Jomaa will be travelling to the France and the United States during the weekend to discuss counter-terrorism cooperation. He hinted that they will be seeking military aid to modernize the armed forces in order to quell terrorism. The outgoing Prime Minister will also meet with the World Bank and the International Monetary Fund to gain further international support for the country’s faltering economy which still remains unstable following the revolution.