Forces loyal to the internationally recognized government in Tobruk have intensified their attacks against the militants of the rival government in Tripoli as they bombed the Al-Jufrah military base. The base is the second most important airbase in the south and has the biggest stocks of arms and ammunition, claimed sources. 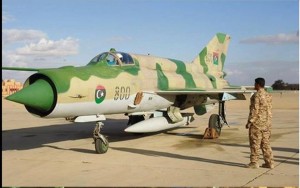 Although the base has been bombarded by NATO troops which destroyed most of it during the uprising against the Gadhafi regime, this is the first time that it has been hit by airstrikes since that operation ended. Several vehicles and weapons are believed to have been destroyed by the bombings although no casualties have been reported. The Tobruk forces have been increasing their airstrikes in the past three months

The base comprises of a disabled civil airport that was used for domestic flights. It is being used by the Islamists as a supply station for the militants of the Libya Dawn backing the Tripoli based government. Al-Jufrah is located in the middle of the southern Libyan desert, 650 kilometers southeast of Tripoli.

Libya’s war has not shown signs of ending and neighboring countries are worried that it will affect the stability of the region.

However, in a bid to limit the participation of foreign troops taking part in the war, the Tobruk government has declared that Palestinians, Sudanese, and Syrian nationals are not welcomed into the country under suspicions that they join the ranks of the Islamists.

A spokesperson from the Interior Ministry stated that the decision was made after information was received that nationalities of these three countries are participating in terrorist groups fighting in Benghazi and other cities in western Libya.