The Heads of state of the member countries of the African Union (AU) have elected Zimbabwean president Robert Mugabe as Chairman. Ahead of his election, his spokesman George Charamba said on Zimbabwean state-owned television station that “the president has for a very long time been complaining about the trajectory of the AU” and laments that its policies are designed “to win the goodwill of the West.” The election of Mugabe has led to mixed feelings within and outside the continent. 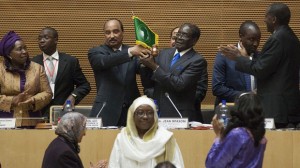 In his acceptance speech, the 90 year old president highlighted that “African resources should belong to Africa and to no one else, except to those we invite as friends. Friends we shall have, yes, but imperialists and colonialists no more.” This remark attracted a lot of applause from his African counterparts in the hall. Mugabe is known to be a vocal president who has often criticized colonialist and imperialist policies.

Charamba claimed that the oldest president in Africa wants to promote the role of the continent in world affairs by establishing “a leadership that recognizes the strategic advantage of Africa and then translates that advantage into a leadership… on the global stage.”

However, the post of the AU Chairman is much more of a ceremonial post but can be used to influence topics for debate although other leaders and commissions also frame discussions. The newly elected Chairman also showed concerns about Boko Haram and said that an everlasting solution is needed.

Critics say Mugabe has spent 34 years in power without any meaningful progress in Zimbabwe. He is subject to travel bans from both the United States and European Union, in place since 2002 in protest at political violence and intimidation.