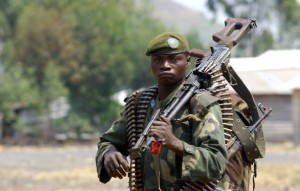 The government of DRC agrees to remit US $ 100 against all weapons surrendered to authorities. The Oriental provincial security committee has set up this operation called “weapon against a special bonus” to fight against the circulation of weapons in the city of Kisangani and the rest of the country. This is to decrease cases of banditry hands armies in the region.

According to the Minister of Interior and Public Order, Hubert Moliso Nendolo, the bonus will also be given in exchange for information leading to recover a weapon.

“The provincial governor is asking anyone in the Eastern Province, in the city of Kisangani, Bunia, Aru, throughout the territory, any information that would lead to see those who are holding small arms; to come with the weapon to see the provincial governor to puts the means for us to provide a premium. An operational weapon with ammunition: 100 dollars, “he said.

The Minister ensures that the informers will be protected against retaliation.

“Anyone who complains, he/she will be protected by given an information. We will investigate and soon we are in possession of this weapon, they will be given 100 dollars, “he said.

The award will be granted to “any one that will bring a weapon to the authorities … be it a weapon that has a charger with ammunition or not.”